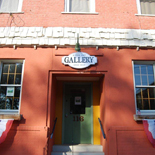 An Art Gallery on The Big River dedicated to Art of, by and for The People!

I explore the cyclical dialogue of internal/external architecture, the body as a mediator and its role in the instability of identity. Through the breakdown and rebuilding of both constructed architectural spaces and the human form, I mimic the everyday filtering and application of our surroundings to one’s self. My choice of materials and techniques become a direct reflection of my past spaces.

This conversation of past/present, internal/external, and our perception of our self is always in flux, and it is the body that becomes a surface in which this dialogue is made visible.  Whether that display is a physical feature, a fashion, conduct or movement, the body becomes the physical representation of our current identity.  My work, in a similar way, becomes a surface where the digestion of internal and external architecture can exist, but separate from the body.  The work then becomes a tangible exploration of my surroundings and my identity, as if a surrogate self with limitless possibilities.

Lisa Wicka received her BFA from the University of Central Florida and her MFA in Painting, Printmaking and Drawing from Purdue University. Wicka has shown at numerous locations regionally, nationally and abroad. She has participated in artist residencies at the Algarden Workshop in Sweden, Spark Box Studios is Picton, ON., and the Lower East Side Printshop in NYC. She currently lives and works in Marinette, WI, where she is the Assistant Professor of Art at UW-Marinette.

Watercolors: The View From My Kayak

I am very interested in the idea of painting with my camera – capturing the impressionistic image of light and color on the surface of water.

These images were photographed on Mille Lacs Lake in Minnesota where I spent every summer of my life and where I now reside half the year.  Most evenings when the water was calm I would go out on the water about twenty minutes before sunset until about twenty minutes after sunset. I usually started with a classic sunset image and then moved to the patterns created by the interplay of the sunsets reflecting on the water and the small cross-current winds blowing over the surface of the water.

Water –  being in the water, being on the water and watching the play of light on the water surface is the inspiration for this show.  The love of experiencing the lake from the bow of my kayak combined with photographing the Mille Lacs Lake evening sky, both before and after sunset, resulted in the capturing of these patterns and colors.

I've been immersed in science fiction since I was very young and as an extension of that I would build models. Generally, kits that I built as a child often fell apart months later and were unpainted. For a time I drifted away from modeling only to re-discover this fantastic hobby in 2008, beginning with science fiction kits and gradually moving back into airplane and military subjects. Since then I've built close to 150 model kits and a handful of them have been commissions. This site is dedicated to all my completed model kits, regardless of client, technique, time invested or genre.
View all posts by Nicholas Sagan →